Our whole life is an adventure and we are the protagonists. Survival training is not only for those, who risk their life on a daily base, but it is good for everyone. The training is very deep and interesting. It develops good skills, like creativity, adaptation, craftsmanship, broader knowledge, dealing with problems and appreciation of what you have or not have in your life. Survival training is serious, but should never be paranoid or radically motivated. Remember, that our ancestors kept preparing for bad times constantly, without being paranoid. There should be a positive attitude towards life in everything we do. Wether normal citizens, company staff or members of law enforcement, military and rescue service – Everybody can improve their skills and evolve.

Did you know that Serbian Emperor Dušan the Mighty (http://bit.ly/2ezr4T0) was probably “the tallest man of his time”? According to documents from the 14th century written by Emperor Dušan’s contemporaries, Dušan was unusually tall and strong, “the tallest man of his time”, very handsome, and a rare leader full of dynamism, quick intelligence, and strength, bearing “a kingly presence”. Dušan is a synonym for a great military leader and ruler, but little is known that he was physically a very striking figure. Interesting story about Emperor Dušan comes from the anthropologists who have analyzed his relics and found that the first Serbian Emperor really deserved to be called the Mighty. An anthropologist, a member of the commission in charge of analyzing the remains of the Emperor in 1991, concluded that by the size of the vertebrae, Emperor Dušan could have been about 215 centimeters tall. The average height of a man at that time was 170 centimeters, and the knights in Emperor’s personal guard had to be at least 2 meters tall. Since the standards were too high and he could not find enough people of required height in his own kingdom, the personal guard of Emperor Dušan numbered 101 knights from all over #Europe. The only member of his personal guard who was supposed to be taller than Dušan the Mighty was the standard-bearer, according to some sources a Swede. To help you understand how strong that man was, we give you the fact that he carried the royal banner weighing 40 kilograms. Also, it’s interesting that Emperor Dušan’s cup for wine had the capacity of more than two liters, and it is kept today in the treasury of the monastery Hilandar (http://bit.ly/2fhdJyq) together with the aforementioned banner. 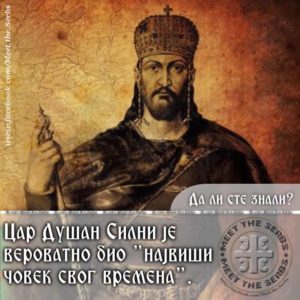 We were invited to teach Nauka at the World Humanitarian Festival of Martial Arts in Budva, Montenegro in 2018. Our good friend Predrag Lazarevic created this Charity event to spread awareness for suicide problems. The seminar with different teachers was on Sunday, 9.9.2018 and everybody was welcome to attend, have fun, learn something and support the good cause. There was an award ceremony and a gala dinner afterwards, where Nauka Clan Chief Delon Stojanovic was awarded for his work.

Very proud to see our Nauka in the notorious Private Military Contractor Magazine – PMCI, reaching out to security professionals in the whole world to save lives. The article appeared in the issue PMCI June 2018. You can find it on our website: http://www.nauka-fighting.com/multimedia/print

Many thanks to our american friends Trampas Swanson, RC Reinolds and Rich Graham for being a part of our Nauka Clan and the support.